“The male equivalent to a vegan Rachael Ray- his recipes are flavorful and approachable and certainly have the same potential for mass appeal.” -Publishers Weekly – 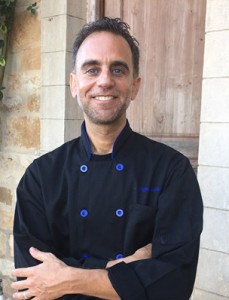 Mark Reinfeld is a multi-award winning chef and author of seven books, including the best selling 30 Minute Vegan series and his latest book, Healing the Vegan Way. Mark has over 20 years of experience preparing creative vegan and raw cuisine. Since 2012, he has served as the Executive Chef for the North American Vegetarian Society’s Summerfest. He has offered consulting services for clients such as Google, Whole Foods, Bon Appetit Management, and more.  Mark was the founding chef of The Blossoming Lotus Restaurant, voted “Best Restaurant on Kaua’i.”

His first cookbook, Vegan Fusion World Cuisine, has won 9 national awards including “Best Vegetarian Cookbook in the USA.” His 7th and most recent cookbook, Healing the Vegan Way, was selected “Best Book for Vegans in 2016” by Philly.com. Mark is the recipient of Vegan.com’s Recipe of the Year Award and Aspen Center for Integral Health’s Platinum Carrot Award. Through his Vegan Fusion company, he offers consulting services, vegan and raw cooking workshops, and chef trainings internationally.